The year is 2005. Britain has left the EU and has been subjected to a terrorist attack similar to that of 9/11. As a result, the country is now governed by an extreme right-wing party, kept in power by nationalist thugs…

I called it ‘alternative history’ …. now it seems to be coming true. Am I clairvoyant – or is this just coincidence?

On Thursday last I went to see Under Milk Wood at the Liverpool Playhouse. It is a touring production directed by Terry Hands and has had rave revues; but to be honest I was disappointed. The words were gabbled, especially by the women, and so lost both the beauty of the poetry and the humour. I often make the same criticism of productions of Shakespeare. There seems to be a prevailing theory among directors that unless the words are spoken very fast and very loudly, with lots of movement at the same time, the audience will get bored. It doesn’t work like that! Harold Pinter knew the power of the silent pause. Television has learnt that silence and stillness can speak louder than words, as anyone who has been watching Hinterland can testify. Shakespeare himself was very much aware of the tendency of actors to gabble and flail about. He set out exactly how he wanted his poetry treated in his advice to the players in Hamlet. ‘Speak the speech, I pray you, as pronounced it to you, trippingly on the tongue; but if you mouth it as many of your players do, I had as lief the town crier spoke my lines….. suit the action to the word, the word to the action, with this special observance, that you o’erstep not the modesty of nature.’ Why have our theatre directors forgotten this?

First I must apologise for the long gap between this newsletter and the last. As many of you already know, I was unexpectedly offered the chance to teach a series of Creative Writing classes on board the liner Thomson Dream, sailing from Lisbon on November 23rd to the Caribbean. As I had already booked a short holiday in Spain from the end of October this meant that I have only been at home for a few days in the last two months. I took a tablet with me on the cruise, intending to keep in touch, but the internet connection from the ship was so slow that it proved impossible to upload even a simple e-mail.

The cruise itself was an interesting experience and a chance not to be missed. David and I were flown to Lisbon and back from Barbados free of charge and had a cabin on board the Dream and all the privileges of normal passengers. In return, I was expected to teach for an hour on the days when we were at sea. Technically this only referred to the six days crossing the Atlantic but the class was so enthusiastic that I ended up giving a total of eleven sessions. There were only fourteen passengers in the group but they were a delightful bunch, with a great collective sense of humour. We had a lot of laughs, but also got through a lot of basic exercises in the techniques of story telling. They all seemed to feel that they had gained a good deal. I offered a prize for the best short story at the end of the course and I was impressed by the quality of the entries. Two of them took the chance to have a tongue-in-cheek swipe at the attitudes of people on the ship, with hilarious results.

Aside from the work, we had the chance to visit seven islands. Many of the smaller ones quickly become blurred in memory – a general impression of blue sea, white sand and waving palm trees… 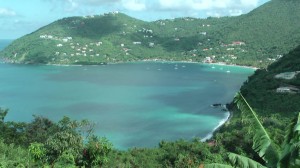 If you see what I mean. The most interesting were Cuba and Jamaica. In Cuba we visited a mountainous area which has become a conservation project, turning hillsides which had been deforested by charcoal burning into a lush, green paradise. Havana, too, was fascinating – vibrant life co-existing with faded colonial splendour. 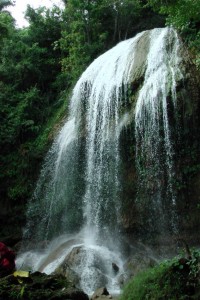 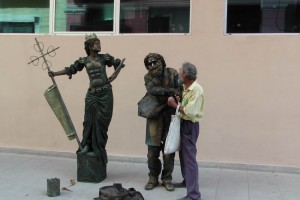 We also had the chance to visit the Mayan ruins of Chichen Itsa, while we were moored off the island of Cozumel. As someone who loves ancient history that was a definite highlight for me.

We got home on Dec 17th, so you can imagine it was one mad rush to be ready for Christmas but somehow by Dec 24th the decorations were up, the presents bought and wrapped. For the first time, I didn’t have to cook for the family, as we were invited to my son Christopher’s house for dinner – but I still had to cook the turkey as with 13 people to feed there wasn’t room in his oven for that plus all the necessary veg etc. It was quite a logistical undertaking, getting it cooked and over to his place while it was still hot. Good job he only lives ten minutes drive away! 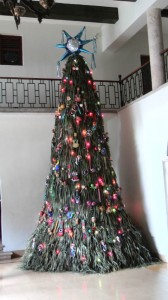 I got home to discover a note from the Royal Mail saying they had tried to deliver a package which had to be signed for. I was just in time to rescue it from the sorting office before it was returned to the sender and discovered that it was the proof copy of my next novel, APHRODITE’S ISLAND, from the publisher Robert Hale – plus a note saying would I please check it and return by Dec 5th! Cue hasty e-mails with my excuses. It’s done now and the book will be out in the spring.

I also had an e-mail from Soundings – the company that produces the audio versions of my books. They are going to do OPERATION KINGFISHER and I had suggested that this time I might read it myself. They asked for a sample of my voice and are happy to go ahead, so I shall be doing that sometime in March or April. I have also been asked to give several talks about the research behind the ‘Leonora’ trilogy because of its relevance to the WW1 commemorations I shall be at the central library in Sheffield on April 8th and at the Ilkeley Playhouse on April 13th, among others. So if any of you are in the area, do come along and make yourselves known.

There are various other invitations awaiting final confirmation, so it looks like being a busy year.

My thanks to all those who have posted reviews of Operation Kingfisher – and best wishes to everyone for a happy and healthy New Year.

I have just been offered the chance to give a series of lessons on creative writing on board the Thomson Dream, sailing from Lisbon to Barbados – free flights for self and husband and all the amenities of the cruise included. We leave on Nov 25th.

I shall be signing books at Linghams book shop in Heswall on Saturday Oct 5th from 11am. I shall also be talking about my work at the Rock Ferry library from 2.15 on Monday Oct 7th as part of the Wirral Book Fest.

I’m just back from a cruise and walk holiday to the Norwegian fjords. We cruised aboard the Fred Olsen ship MS Braemar, which moored up in a different fjord every day and we were then taken on guided walks by a leader from the Ramblers’ Association. The walks were energetic but not unduly taxing, varying between 4 and 9 miles and we saw some beautiful scenery. Life on board was luxurious, as one might expect on a cruise.The weather was variable – blue skies and sunshine in Skjolden, pouring rain in Bergen – and we sailed back through a Force 9 gale, which laid many of the passengers low with sea sickness. Fortunately neither I nor my husband were badly affected. Altogether I can recommend a holiday like this for anyone who wants to get out and about in places you might not otherwise reach, while enjoying a high standard of comfort.

Was anyone listening to the first item in Women’s Hour this morning (Tuesday July 9)? I happened to catch while making soup. It was a discussion about ‘angry women’ based around a novel called ‘The Woman Upstairs’ in which the protagonist declares that she has always been a ‘good’ girl – obedient, good student, good mother, good daughter – but she is seething inside because this has been at the expense of developing her own creativity. This brought to my mind a dilemma I frequently face myself. I once shocked Louis de Bernière by remarking that I couldn’t settling to writing until I had hoovered the bedroom carpet (this being shorthand for all the various domestic chores that require time). From his reaction, and that of other women in the group, you would think I had said I could not settle to write until I had drunk the fresh blood of an innocent child!

I once read an interview with a well-known comedienne and writer who maintained that she would never stoop to cleaning a floor or ironing a shirt, the implication being that such activities would demean her creative genius. I have read of women writers who shut themselves in their office, or the garden shed, at 9 a.m. with a notice on the door warning that anyone who disturbs them does so at their peril. How do they do this?

The question that comes to my mind is, if not me, then who? Do these other women simply allow the chaos to build up until they and all around them are wading through the detritus up to their knees? Or do they assume that someone else, someone less ‘creative’, will clear up after them? Of course, there is always the option of paying someone to do the work, and there are plenty of people out there who will be glad of the job. It is an option I have considered, but then I think of all the other things the money could pay for – my weekly riding lesson, visits to the theatre, the occasional meal out – and I decide to carry one doing it myself. That is my choice, and others will choose differently. What I object to is the hubris that implies that if you are ‘creative’ that places you in a category above domestic chores, and that those who undertake them belong to a lower order of being.