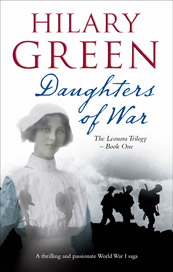 The year is 1912 and Britain is gripped by fear of war with Germany.

Intelligent and headstrong, young Leonora Malham Brown feels stifled by the restraints imposed on her by her respectable middle-class upbringing. But a chance encounter with the feisty Victoria Langford is set to broaden her horizons irrevocably. Victoria introduces Leo to the FANY, the First Aid Nursing Yeomanry, where the two girls learn First Aid, stretcher drill, veterinary work and signalling. When trouble flares up in the Balkans, Victoria and Leo decide to put their skills to practical use and head to Bulgaria to offer their assistance on the battlefield.

And so they set off on the adventure of a lifetime, neither of them fully prepared for the grim realities of war. But as well as danger, fear and excitement, Leo will find unexpected – and passionate – romance.

For a moment nobody moved, then a man in the uniform of a Serbian colonel rose from a table near the door and came towards them. He was tall and had the bearing of one used to command. Unlike most of his fellow officers he was clean shaven, with high cheek bones and brooding dark eyes under arched brows. He stopped and clicked his heels and said in German, ‘Excuse me. I can see you are not native to this area. I am sure you will not speak Serbian. I hope you understand German.’ When they both answered in the affirmative he went on, ‘Allow me to introduce myself. I am Count Aleksander Malkovic. May I ask who you are?’

‘I am Leonore Malham Brown and this is my colleague, Miss Victoria Langford. We have just arrived from England.’

‘From England! But, dear ladies, you must be aware that you have come to a war zone. Until a few weeks ago this city was under bombardment and the Turks were still in occupation.’

‘We are perfectly awar of the situation,’ Leo responded stiffly. ‘That is why we are here. We have come to join the Women’s Sick and Wounded Convoy. We are on our way to Chataldzha to offer our services.’

‘To Chataldzha!’ His lips curled in a expression that was somewhere between amusement and contempt. ‘Really, that is quite impossible. That is the front line of the Bulgarian advance. The fighting there is at its fiercest.’

‘Which is why that is where we are most needed,’ Leonora retorted.

WHAT READERS SAID ABOUT ‘DAUGHTERS OF WAR’.

Hurrah – how exciting we have another trilogy to keep us on the edge of our seats waiting to see what happens to all the people who you have created for us to get to know.

Green’s characters are intensely real, idiosyncratic, fascinating, but not just Leo and Victoria. As the first installment of an anticipated trilogy focusing on Leo, this novel gives the reader a fine appreciation of the depth of character that a talented writer is capable of imparting to an otherwise one-dimensional creation. Well done and highly recommended. (HNS)

“I volunteered to collect wounded men from the battlefield and give first aid, not to nurse plague victims,” insists Victoria, who convinced fellow socialite and heroine Leonora, called Leo, to join her in FANY, an organization of British women volunteering to transport soldiers from Serbian battlefields to safety and administer emergency aid. Though Turkish-Serbian hostilities wax and wane, typhus hits, and Leo is determined to stay and help. That’s not the only unexpected development. Wearing breeches and with her hair cropped, Leo is mistaken for a young man by the dashing Serb Colonel Malkovic, who makes use of her translation and personal-assistant skills. In a Shakespearian turn, Leo is smitten and afraid that he will disdain her for her deceit in a time and place when only scandalous women ride horses astride. Green’s smooth, measured pace perfectly fits the era immediately preceding WWI. This is the first in the Leonora trilogy, and the promise of more of her adventures will delight readers. (BOOKLIST)

For a further review of ‘Daughters of War’ go to http://www.thehwa.co.uk/book/harvest-war

Goodreads reviews for Daughters of War