I was first alerted to the possibilities of this story by Tony, a friend who has a keen interest in Inland Waterways, both in the UK and in France. He has his own narrow boat, which is currently moored on one of the French canals. It was Tony who asked me if I knew that during the war the canal network had been used as a way to smuggle POWs and downed airmen out of the country. When I expressed my interest he sent me some photo copied pages from a book, ‘Keeping Afloat’ by John Liley. These contained a reference to an extraordinary event which occurred in April of 1943. After the Allied invasion of North Africa the Germans, fearing an attack on the south coast of France, decided to move some of their warships from the North Atlantic to the Mediterranean. Rather than taking the long sea route they decided to use the French canal system. French canals are, of course, considerably wider than ours and carry much heavier traffic. The vedettes were brought down the River Yonne and the intention was to take them through the Canal de Bourgogne to connect with the River Saone and thence to the Mediterranean. However, when they reached Laroche Migennes, where the Canal de Bourgogne meets the Yonne, they discovered that the locks on that canal were too short to accommodate the ships. A new route had to be devised and 1,500 young men were pressed into service to rebuild roads, so that the ships could be moved overland. Buildings were demolished, bends straightened out and gradients eased. The nearest slipway was in Auxerre and the residents of that town were astounded to see the spectacle of these huge craft being hauled out of the river. They were loaded onto two 48 wheeled chariots, pulled by three giant tractors, with four more at the rear to provide braking power. It was forbidden to photograph these events but there are, nevertheless, several pictures taken clandestinely to bear witness to this amazing undertaking. Ironically, the RAF was alerted to what was happening and not one of the ships ever reached the Mediterranean!

These events form the background to my new novel, OPERATION KINGFISHER. 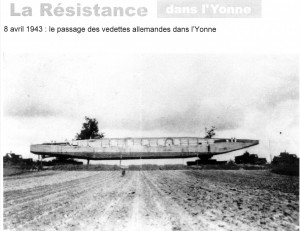 I absolutely loved this book. I’ve been a fan of historical fiction about the ancient world ever since reading Mary Renault’s Theseus books when I was in my teens and ever since then I’ve sought to replicate the experience, without much luck. Annabel Lyon’s THE GOLDEN MEAN came close, but Hilary Green’s THE LAST HERO could almost have been written by Renault herself, it feels so authentic, so meticulously researched and so tightly written. I thoroughly recommend it.

I’m just back from a cruise and walk holiday to the Norwegian fjords. We cruised aboard the Fred Olsen ship MS Braemar, which moored up in a different fjord every day and we were then taken on guided walks by a leader from the Ramblers’ Association. The walks were energetic but not unduly taxing, varying between 4 and 9 miles and we saw some beautiful scenery. Life on board was luxurious, as one might expect on a cruise.The weather was variable – blue skies and sunshine in Skjolden, pouring rain in Bergen – and we sailed back through a Force 9 gale, which laid many of the passengers low with sea sickness. Fortunately neither I nor my husband were badly affected. Altogether I can recommend a holiday like this for anyone who wants to get out and about in places you might not otherwise reach, while enjoying a high standard of comfort.

Announcing the publication of my latest novel, which will be available from Sept 30th. OPERATION KINGFISHER is the story of two teenagers trying to escape from occupied France during World War ll. After a series of mishaps they stow away on a canal barge and find that they have providentially fallen into the hands of an escape line set up to help Allied POWs and downed airmen get out of the country. As they are passed from one contact to another, they encounter a mysterious stranger who eventually reveals himself as a British agent. He puts them in touch with the local maquis  freedom fighters who are based in the Morvan Hills in central France, close to where they are on the Canal du Nivernais. When they see French warships being transported along the canals they make up their minds that the maquis must be informed and, instead of escaping, find themselves recruited into their ranks.

This is an exciting adventure story but also a touching tale of two young people coming of age in very difficult circumstances and discovering important truths about themselves. Based on real events and the result of extensive research it gives an authentic flavour of life with the Resistance. In the course of writing the book I visited that part of France, travelled along the canals and explored the still unspoiled and remote hills of the Morvan.

The book will only be published in hardback at £19.99 but should be available on request at any library.