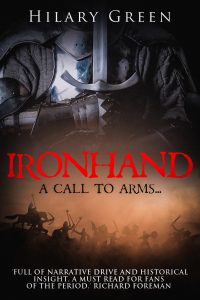 William the Conqueror’s men are devastating the north of England.

Ranulph of Erbistock is left orphaned.

Brought up by monks, he shows himself to be intelligent, with a love of learning. But he harbours one burning ambition – to be at the head of a great force that will drive the invader from his land.

Ranulph runs away to sea. Abused by his captain, he unintentionally causes the man’s death.

When a torrid love affair ends in bitterness, Ranulph earns the enmity of Viviana, a Byzantine princess.

In Antioch he falls in love with Mariam. Now a wealthy man, he promises to marry her when he returns on his next voyage.

But the revenge of Viviana catches up with him.

Captured by corsairs, Ranulph is sold to the Emir of Malta as a galley slave.

Malta is conquered by the Norman, Robert of Sicily.

Robert offers Ranulph a position as his steward – but can he bear to work for one of the tribe that killed his family?

The orphan from England believes a different fate awaits him, involving a call to arms and a call to God.

The small boy clung to his mother’s skirts. He could feel her trembling. It was not something he had ever felt before and it filled him with terror. If it were not for that, the shouts and yells that came from the other side of the great oak door at the far end of the hall would not have seemed so frightening. He could hear the clash of metal and a roaring, crackling noise that he could not identify. Then he heard his father’s voice, louder and more furious than he had ever heard it before.

‘Come on, you bastards! We’re ready for you! Stand fast, men! Don’t let them ….’ The words ended with a gurgling cry, as if something had grabbed his father’s throat, and the child felt his mother start forward and heard her choke back a scream.

There was a crash as something struck the door and then a splintering noise, and he saw the blade of an axe caught in the broken planks. Suddenly his mother bent and grabbed him, lifting him off his feet and carrying him up onto the raised dais at the end of the hall. There was an opening in the wall at the back, to let in light and air. The boy felt himself swung over the sill, his feet dangling an arm’s length above the ground below.

‘Ranulph!’ his mother said hoarsely. ‘Do you remember the hollow tree where you hid, when we were playing?’ He wriggled in her grasp, trying to climb back to the safety of the hall. She gripped him hard. ‘I am going to let go of you. It isn’t far to fall. You won’t hurt yourself. Then you must run as fast as you can to the hollow tree and hide there until I come and find you. Do you understand?’

‘You must! You have to be a brave boy, to make your father proud. Go! Go, my darling!’

Her hands released him and his legs buckled under him as he hit the ground. He scrambled up, tears running down his face, and held out his arms to her.

Then someone dragged her back out of his sight and he turned and ran as fast as his short legs could carry him, towards the woodland that fringed the village. He could hear the shouts and screams behind him and smell burning, but he did not look back. He reached the trees and struggled on, his legs scratched by brambles that lay across the path, until he reached the small clearing where the great oak stood. He squeezed into the space at the base of its trunk and crouched there, panting and sobbing. The noises from the village grew less until he could hear nothing but the roar of the flames as the thatch on the roofs burned. After a while he stopped crying. It was autumn, the first chilly days of the year, and he began to shiver. He drew his knees up to his chest, wrapped his arms around them and waited for his mother to find him.

I have read several Hilary Green historical novels and enjoyed them all. “Ironhand” is no exception. This is a new period of history for this author. I was more familiar with details of WW1 and WW2 which formed the background of previous novels. This novel is set in the 11th Century and begins in England just after the Norman Conquest. I realise that Hilary Green always does a huge amount of research to provide an authentic background and I learned a lot about the life of seamen and soldiers in the 11th Century. The story line captures and holds the reader’s interest throughout the novel. The characters are also well drawn and allow the reader to empathise with them.

Absolutely fantastic read, the book goes into great detail about the history during this period. There is also a compelling storyline.