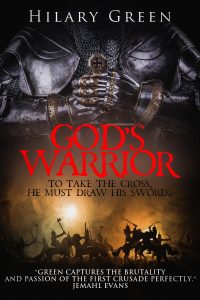 Pope Urban calls on the princes of Christendom to free Jerusalem from the infidel.

Bohemond of Taranto arrives in Sicily seeking recruits for his force of Crusaders.

Bohemond’s army is beset by enemies without and dissension and treachery within, but Ranulph becomes one of his trusted councillors.

In Constantinople, Ranulph becomes the confidant of Anna Comnena, daughter of the Emperor Alexias.

The crusaders fight their way onwards until halted by the impregnable walls of Antioch.

Ranulph calls on the help of an old friend to find a way into the city.

In the midst of the ensuing slaughter he is reunited with Mariam, the woman he hoped to marry.

Besieged in their turn, the crusaders are saved by the discovery of the Holy Lance.

Jerusalem falls to them at last, but Ranulph is again sickened by the terrible slaughter that follows.

Almost at the point of death, he is offered a chance to join a new Order of Brothers whose purpose is to care for the sick. But bitter battles still have to be fought, as the Crusaders struggle to hold on to the city they have liberated.

THE CASTLE OF MARGAT IN THE PRINCIPALITY OF ANTIOCH.

A slow procession of ox-drawn wagons, guarded by armoured knights whose black cloaks were emblazoned with the white cross of St John, wound its way up the steep slopes of the hill crowned by the massive walls of the castle of Margat. They carried the wounded who had fallen in the battle of Hab, two days earlier. At the side of one of the wagons rode Sir Marc d’Ambray, whose face, weathered by sun and wind and marked with old scars, showed him to be the veteran of many battles. On the other side rode a young lay brother, whose eyes returned again and again to the face of the man who lay, unmoving, on a bed of straw between them.

The wagons creaked over the drawbridge and came to a standstill. Willing hands lifted the men in them and carried them into the great hall of the castle, where they were laid in long rows on pallets. Some of them groaned or cried out in pain as they were moved, but the man Sir Marc had guarded made no sound, nor did he open his eyes. Marc called one of the infirmarians who tended the wounded to him.

‘Can you find a quiet spot for Sir Ranulph? He has been insensible ever since the battle ended and he needs our greatest care.’

‘Of course,’ came the ready reply. ‘I am sorry to see him in such a state. No one is more worthy of our closest attention.’

The unconscious knight was carried to a small chamber leading off the hall and Sir Marc turned to the young lay brother. ‘Get some rest. You watched all night with him and have travelled all day. You need to sleep.’

‘As you must, too,’ the boy responded. ‘We watched over him together.’

‘He is in good hands now. We can allow ourselves a few hours respite.’

They parted, each to seek a quiet corner in the overcrowded castle where they could sleep; but the night was not far advanced when Marc roused himself and made his way to the chamber where his old friend was lying. Even so, the younger man was already there, kneeling at the bedside in fervent prayer.

Marc waited until he looked up, and said, ‘There is no change, then?’

The boy got up from his knees, his brow creased. ‘I …I’m not sure. Perhaps it is just because I wish it to be so, but I thought I saw his eyelids flicker… but now…’

Marc stooped over the bed. ‘Ranulph? Can you hear me? Give me some sign if you can.’

There was no response and he straightened up. ‘We must not give up hope. He is still breathing. Perhaps in time …’ He left the sentence unfinished and drew a stool close to the bedside.

The boy fetched another and settled himself on the opposite side. He leaned forward and clasped his hands between his knees.

‘When we watched together last night you began to tell me the story of Sir Ranulph’s remarkable life. I was as much enthralled as if I was listening to a bard telling me some fantastic tale. But you broke off at the point where he had been rescued from the galleys by Count Roger of Sicily and offered the postition as his secretary. I still do not know how he came to take up the cross, or what befell him on the long march to Jerusalem.’

Marc stretched and yawned. ‘It was a long march, indeed. Three years it took us.’

‘I am surprised that Sir Ranulph agreed to take the post Count Roger offered him. He is a Norman, and as you told me last night, Sir Ranulph had good reason to hate all Normans.’

‘True. But you must remember that he had been vouchsafed a vision, in which God told him that he should fight beside his fellow Christians against the infidel, instead of taking up arms against them. From that time on he truly believed that God had a special purpose for him.’

‘The liberation of Jerusalem?’

‘So it transpired. But six years passed before that purpose became clear. Six years during which he faithfully fulfilled his duty to Count Roger, mediating between him and the Sicilian Moors he had conquered and bringing peace to the island. He honed his talent for languages and developed his interest in the wisdom of the Arab peoples. But he still maintained the warlike skills he had learned in his apprenticeship as a mercenary soldier, and kept himself in regular training.’